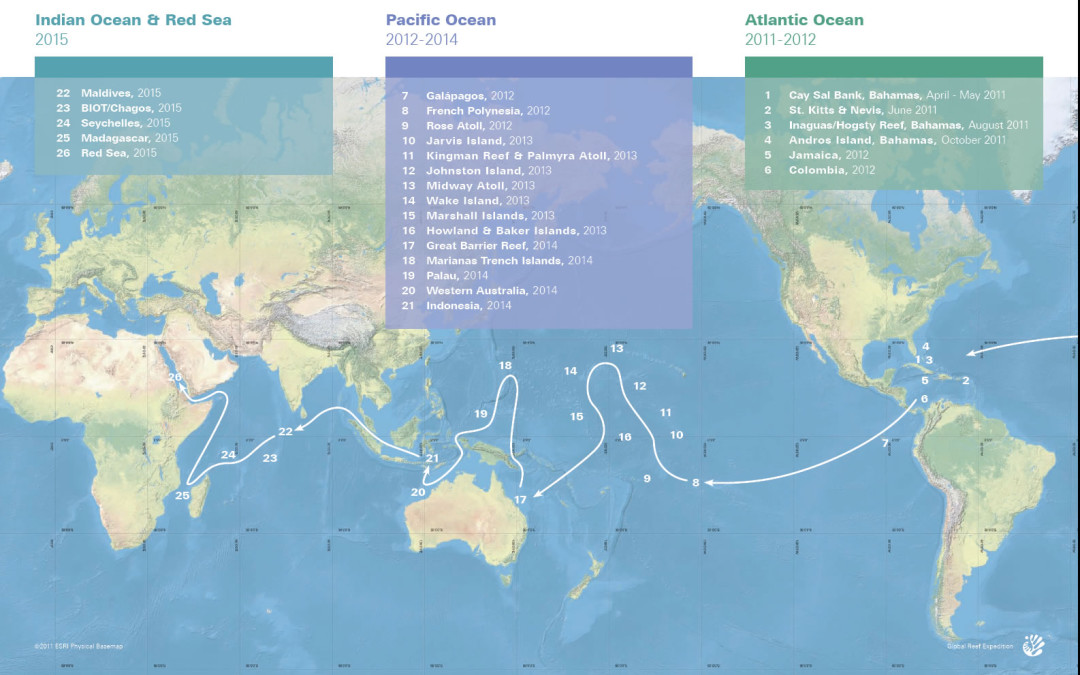 This morning I was aboard the 220-foot motor yacht Golden Shadow, a floating laboratory and the new headquarters for 17 ocean scientists studying coral reefs worldwide. The vessel will set sail today from Miami to embark on the largest scientific effort study the threats and impacts coral reefs throughout the world.

The 5-year global reef expedition, sponsored by the Khalid bin Sultan Living Oceans Foundation, will make their first stop in the warm blue Bahamian reefs where they will uncover the mystery of the famed “Bahamas blue holes” and mega-ripples of pearl-size sand growing along the seafloor off the Bahamas Banks. The ship is equipped with lots of science toys — from a ROV that can travel 500 feet below the surface to specially designed sensors to study the physical and chemical conditions of seawater.

The entire expedition will span roughly 40,000 nautical miles, beginning in the Caribbean, head through the Galapagos into the Pacific to the bio-diverse Indo-Pacific coral triangle region and end in the Red Sea in 2015.

The mission to assessment the health and resilience of coral reef environments is vital. Coral reefs are being lost at an alarming rate. According to the recent published Reefs at Risk Revisited report, 75% of coral reefs are threatened from human activities, such as coastal pollution and over fishing as well as from climate change and increased carbon dioxide in the world’s oceans.

The ambitious and privately funded Global Reef Expedition will undertake research in oceans and seas around the world to help thwart the assault on coral reef ecosystems and to assist resource managers in their efforts to reverse the trend of deteriorating coral health.
Here are a few reasons to protect coral reefs worldwide:

• More than 275 million people worldwide live in the direct vicinity (30km/18 miles) of coral reefs.
• Coral reefs protect 150,000 km (over 93,000 miles) of shorelines in more than 100 countries and territories – helping defend against storms and erosion.
• At least 94 countries and territories benefit from tourism related to reefs; in 23 of these, reef-related tourism accounts for more than 15% of gross domestic product.
• Many reef species harbor the potential for disease prevention, including treatments for cancer, HIV, malaria, and other diseases.
(Data from the World Resources Institute Reefs at Risk Revisited Report 2011)

To learn more about the expedition, visit: www.globalreefexpedition.org