Diving in Negril and other Jamaican secrets 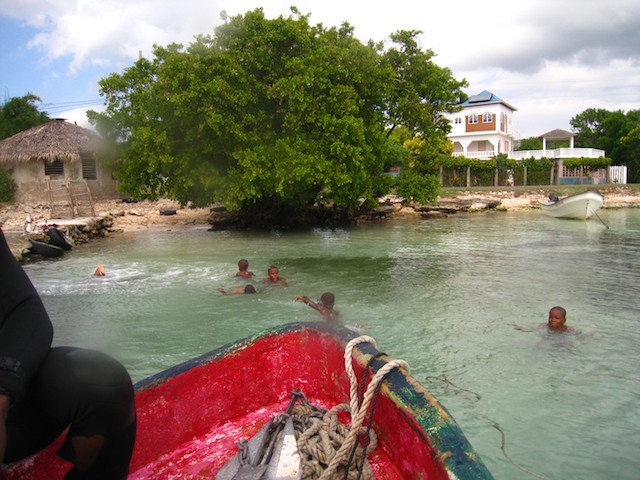 Arriving is an event. Kids In Negril. Nemo, the smallest one who is aptly keen on SCUBA gear and swimming,and friends greeted us as we came back from a dive. They didn\’t believe in personal space, and had the most adorable polite manner of in your face begging, “Have any sweeties miss?”

I got tired of trying to go out in rough seas, and getting little (or likkle, in Jamaican patois) work done. So I headed for the calm waters of Negril on the west coast. In addition to re-surveying my 7-meter radius, permanent plots; I am also trying to get a sense of the density of these corals along the entire northwest coast. The folks from Jamaica’s National Environmental Protection Agency were nice enough to let us tag along on a Reef Check dive that they were conducting. There wasn’t much Elkhorn Coral in this area maybe 10 across a 300m area, but not a one of them showed up in my transect. Boo. Nevertheless, it was nice to see a different part of Jamaica.

Friday November 19, 2010.
It occurs to me that I’ve offered no background to the uninitiated. Who am I? What am I doing? Why am I doing it?

More importantly, who are you? Why are you reading this? Are you a friend of mine curious about the details of what I actually do either over or under water, in the states or in Jamaica?A colleague looking for someone to verbalize the sometimes drudgery of SCUBA diving when it becomes your job? My hopiest of hopes is that you are a stranger to me, someone interested in the world. Take out your hand lens. Welcome to Jamaica. Mon.

Jamaicans are great. I knew it from the second person I met here on my initial trip in 2007. I suspected that I had landed in a nice place when the immigration agent that greeted me after a 4 hour delay in MIA (how on earth did that airport code pass inspection) had time for a 10 minute description of the drive I was about to make.).Then there was Clive from Budget. He had a gentle, sweet smile. He was chatty and nice. Was he hitting on me? I couldn’t tell and I didn’t care. When he turned around to accept a call and broke out into Jamaican, I gasped. The only jive talking I ever heard was in the movie Airplane. Well, turns out you really do need subtitles. Clive returned to English, and guided me out to my car with a slow camular gentleness. That’s when I learned I had to drive on the left.

It’s not all peaches and cream though. When you need something, for instance a car with tread on the tires, or to not be charged $30 for a jack that was never in the car in the first place, or to pay the fisherman the fare you had originally agreed upon, then Jamaicans can be infuriating. I suppose it’s my own fault, I show up here for 3 weeks per year, and I need to get shit done. Why would Moonie the fisherman or Miss Daisy the supervisor at Thrifty Rental Car (people rock the nicknames here) not try to extort another $30 off my white mosquito-bitten ass.

Alas, I digress, the goal here is to give a sense of Jamaica, who I am, what I’m doing, and why. Coral reefs are in trouble. Have you heard them crying? Seen them protesting climate change in front of the White House? Watched them toiling away at their computers creating alternative energy sources? Yeah well, those things are hard if you can’t even walk. Corals are literally stuck. They can’t move. And the assault of man — centuries of overfishing, farming with excess nutrients, soil erosion from land clearing, and burning fossil fuels has caught up with these ancient creatures. Corals have been around for 540 million years, they are one of the oldest life forms. They are so simple – justs two cell layers thick! Mass extinctions have wiped out 99% of all species that ever existed, and corals have held on (different species of corals have been wiped out but the groups has held on).

Now 1/3 of them are threatened with extinction. “Humans are causing the next mass extinction” — I’ve always had to stop just short of rolling my eyes at this phrase. It rings of the over-sell of which environmentalists are oft accused. But it’s sadly true.

Saturday, November 20, 2010
I was supposed to be home today. And now it looks as though I will have to make use of these last few days in some way other than diving. The winds picked up again and I am grounded. Luckily, I have 8 of 9 surveys complete.

I am surveying Elkhorn Coral (Acropora palmata, or Pantile as it is sometimes called in Jamaica). It is one of the lucky third (of all corals to face extinction), and the first to be listed on the US Endangered Species List. This makes it a sort of VIP of the coral world, which also means there is some funding to conserve it. Enter, PhD Thesis Research Project Experiment Study.

When I got to PhD school in beautiful (but boring) La Jolla, I was, hmmmm…how shall I put this…in a hurry. I was there to learn fast. I wanted a project, I wanted in and out. I had a combined bachelor and masters in conservation biology from the University of Pennsylvania, had worked for five years for the New York City Parks Department’s Natural Resources Group, and wanted to see if i could do more than restore a 1.8 acre salt marsh. (Not that there is anything wrong with that! Although we poked fun and wrote a Broadway show stopper called “What’s the point?”, this work is an amazing educational tool for 10 million American citizens and certainly does no harm to the environment. Au contraire. This work has brings back bait fish, increases and improves bird habitat, and helps filter NY’s numerous waterways. Read the New York Times Magazine article, How Did New York City Become a Diverse Ecological Hotspot?

Anyway, I had come to figure out how to do marine conservation. The intertidal, I had figured out already, but the ocean? How do you restore the ocean? So began my studies in the National Science Foundation-funded Integrative Research and Education Traineeship (IGERT) at the Center for Marine Biodiversity and Conservation at the Scripps Institution of Oceanography, University of California San Diego. Or, if you prefer, the NSF IGERT CMBC SIO UCSD. Full stop.

I had done a bunch of field work before, and as carefree as it sounded to dance around the Caribbean in my bikini, I was more interested in learning a new skill. Math and modeling. It sounds ridiculous when I write it, but it was and is still true. I can say that whilst I sit here on a Saturday off (due to wind, not laziness!) in Jamaica — at my computer and distinctly not drinking a Red Stripe at the local Dance Hall. Furthermore, and it’s hard to realize that I had this much forethought, but I arrived in San Diego single, 31 years old, firmly tired of falling in and out of love, and with the hope of someday having a family which might not want to follow me SCUBA diving around the world. So I thought I better get good at something which I could do with a minimum of travel. Plus, I like math.

Long story short, I found out that there was a treasure trove of demographic data on Elkhorn Coral, a species rising in fame, from the National Oceanic and Atmospheric Administration’s Southeast Fisheries Science Center. And decided I will figure out the population dynamics of this poor sot, so we know what kind of time frame we’re working with. How fast will Mr. Horn go extinct? That paper will be written next month. Stay tuned.