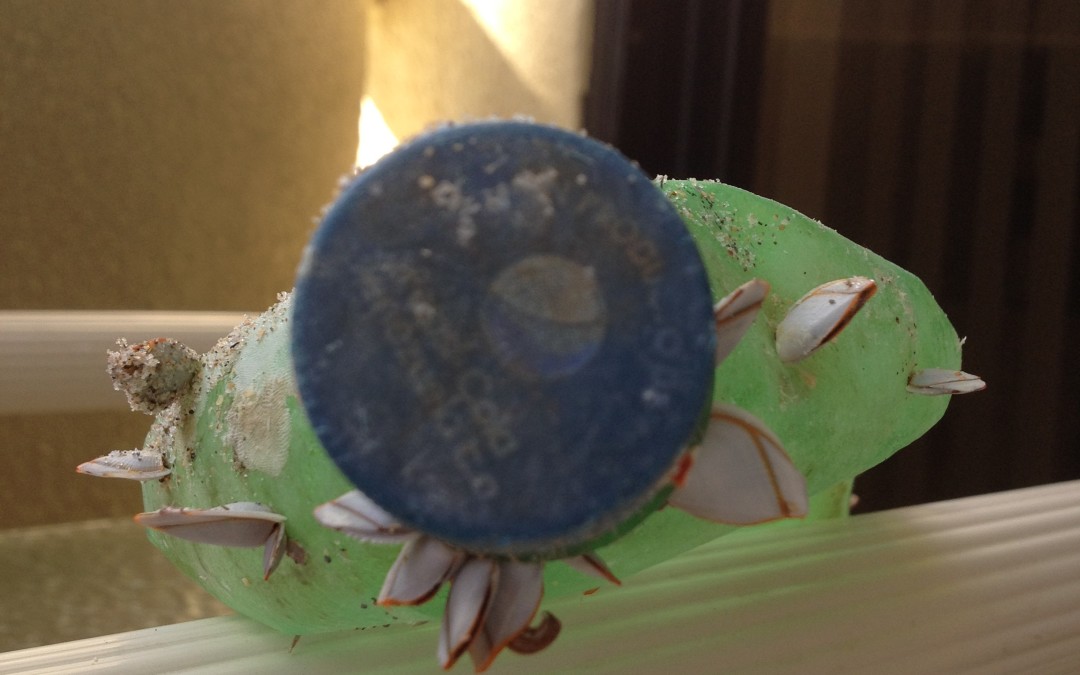 It wasn’t an emigrant looking for economic freedom lying there on a Florida beach, but instead plastic trash hightailing it out of Chavez’s Venezuela. Is this a sign of a bigger problem offshore? Along its northerly journey out of the Caribbean Sea, it likely drifted north into the Gulf of Mexico through the Yucatan Straits, between Mexico and Cuba, before hitching a ride in the Florida Straits and onto the Gulf Stream. Along the way it picked up oceanic passengers, namely gooseneck barnacles looking for a suitable oceanic drifter to call its home. By the looks of it after finally washing ashore, the bottle had quite an adventurous tale to tell.

Today, plastic bottles and other unsightly plastic trash inhabit all oceans on Earth and originate from every distant corner of the planet. Our global plastic problem has gained some worldwide notoriety, most notable in the “Great Pacific Garbage Patch,” in waters off California and Japan where our plastic world is piling up in the middle of the ocean.

This recent Bolivarianism defector that washed up on this once pristine Florida beach is an indicator of the Atlantic’s global trash problem.

A study published in 2010 by the Massachusetts-based Sea Education Association documenting 22 years of marine pollution on the US East Coast showed dense concentrations of marine debris along the western North Atlantic Ocean and Caribbean Sea.

Like it’s Pacific counterpart that gives rise to the “Great Pacific Garbage Patch,” the Atlantic Ocean also has a convergence zone at its center, produced by a network of strong ocean currents, where trash accumulates. The SEA researchers noted that the highest concentration of plastic corresponded with this oceanographic sub-tropical convergence zone in the Atlantic.

Is it possible that Pepsi’s plastic drifter make a wrong turn on its way to the “Great Atlantic Garbage Dump?”